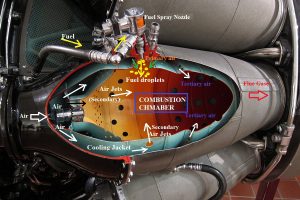 Modeling the Combustion with Complex Physics and Chemistry

The basic of combustion is explained in the previous post which comprises many subjects like thermodynamics, heat and mass transfer, chemical kinetics, and turbulent chemistry interaction (TCI). Mixing of air and fuel decided premixed and non-premixed flames.  Many industrial problems where combustion comprises many complex physical and chemical  processes  such as:

Due to complex physics and chemistry, various CFD models have been developed. The following are some examples of complex combustion.

Major physical and chemical processes occur during the burning of pulverized coal particles in a PC coal-fired furnace.

Steps for Modeling of Coal Combustion

Apart from the selection of turbulence model  and enthalpy transport, we have to select the coal combustion as the following ways:

Modeling of Slagging or fouling of boiler tubes

a) Primary Break Up

Selection of  Models for Diesel Combustion

Modeling of Afterburner of Jet Engine