What are the fundamentals of Fluid Machinery?

What is fluid machinery? 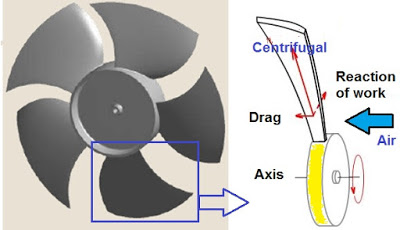 What is the difference between fluid machinery and turbomachinery?

Turbo-machines  based on  Directions of fluid flow

Parts of the Axial Turbine Stage

Classification Based on Direction of Energy Conversion

The fluid machines may be classified under different categories as follows:

Classification on the Principle of Operation and Fluid type

Based on the Type of Fluid Used

Representation of A Single-stage Axial Turbine

Cascade view of the axial turbine

Parts of the Radial Turbine

Components of the radial turbine

Representation of Flow through the Pump

What is an aerofoil?

where enthalpy is dh = vdp=dp/ρ When the process is isentropic: Tds =dh-vdp

Where Po is the stagnation pressure

Assumptions considered for the analysis of energy transfer

where m is the mass flow rate of fluid through the rotor. The subscripts 1 and 2 denote values at the inlet and outlet of the rotor respectively. The rate of energy transfer to the fluid is then given by

Angle Made by Absolute Velocities:

Angle Made by Relative Velocities:

Using the expressions of and we get H (Work head, i.e. energy per unit weight of fluid, transferred between the fluid and the rotor as) as